Andrea Hild’s work, which may be described with the generic term 'Memory shots', attempts to record the phenomenon of the "Photo Album" in drawings and stories - or rather, the moment contained in the photography and which the owner of the photo album considers "worth remembering".

The raw material comes for this comes from family photo albums which she finds at flea markets. There are portraits, pictures of excursions and celebrations. Old photographs awaken ambivalent feelings because on the one hand they want to convey a sense of, "this was exactly how it was" - the photo is the proof. Everybody laughs. It was a beautiful day. The creator of the photo album would like us to believe precisely this. On the other hand, one is aware that a photograph does not have to represent reality. Was the situation (the "Memory Shot") possibly just provided? In her work, Andrea Hild wants to scatch at the surface and tease out the unspoken that might just be hidden behind the gloss, the hairdo and the birthday cake. In this way, the story that the makers of the photo album wanted to tell, is spun a little further.

Getrude Stein offers a very good explanation of the concept of "telling": At some point, words were invented to tell a particular story. Decades or centuries later, we still use the same words, but to tell a new story. Andrea Hild is able to precisely transfer this to her way of working. She uses photographs taken by a person at some time or the other in order to have something to tell. She removes the people in the pictures from their previous context, combines them with other people from other photographs and thus tells a new story.

The material that Andrea Hild uses for this, reflects the characteristics that can be attributed to photography, again, for example, its reproducibility. Etchings and drawings on transparent paper can be reproduced. Repetition is a recurrent theme in her motifs.

Thread and needles build the bridge to reality. They stand for cords, loops, things stitched-on; snake their way through the individual transparent layers of paper and connect the different narrative levels together. What arises is a tangible piece of weaving. Both visual and contextual. Yet they remain metaphors. 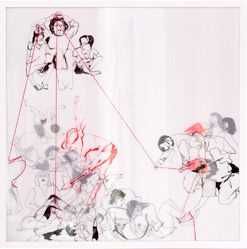 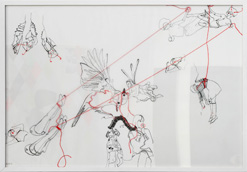 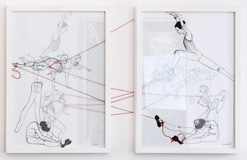