Daniela Bergschneiders sculptures look like living creatures, organisms; and because of their size, they seem dangerous or, at least, invasive. They seem to compete with the spectators for air and space, as if they had their own will and history, as if they possessed an antique wisdom, a prehistoric tenacity. This is, in part, because she always presents them fixed to a wall, defying gravity as if they were fungi or gigantic viruses able to climb walls.

But the definitively organic quality in her work has to do, above all, with her way of working. The artist spends hours getting acquainted with her fabrics, experimenting, trying, getting to know their nature, discovering everything they can do. She lets herself be guided by the material, it dictates her the way. It’s as if she was channeling the vital force of nature. Such a sensibility, also, charges her pieces with a tremendous sensuality, full of visual and tactile information.

Here it’s necessary to point that Bergschneider uses synthetic fabrics, created for industrial use and with a high plastic percentage. Therefore, the artist can heat them up, mold them, elongate them, burn them, cut them, fold them; she transforms them and changes the way we understand them.

In The Savage Mind, Claude Levi-Strauss points out that the man gave birth to civilization when he started changing, deviating uses from nature (plants, animals, objects, objects’ fragments) out of necessity. He named this procedure bricollage and underscored that it was “the first science.” So Daniela Bergschneider makes bricollage; she takes plastic textiles and deviates their use, as we have seen. But why? What pushes her?

It is clear that in her work the artist creates tensions among opposites: she stands between the inorganic and the organic, between the natural and the artificial, between the micro and the macro (some of her sculptures recall gigantic microorganisms), between the artisanal (her manual work is slow, repetitive and careful) and the industrial (the fabrics), between protection (the original use of the fabrics) and the threat (the feeling produced by her creatures)… and, of course, between the beautiful and the repulsive (her pieces attract and repel at the same time, they are ominous.) All this gives depth to her sculptures; they are rich in meanings and feelings.

But, again, what moves Daniela Bergschneider to do what she does?

I like to think that she is propelled to underline the many contradictions of life and above all the power of a wild nature, uncontrollable and omnipresent; using, ironically, the products of a highly industrialized technocracy that proposes a tamed nature, controlled and idealized, be it as producer of food and raw materials or as the place for a safe, nice and comfortable melancholy (the beauty of the Romantic landscape.) Daniela Bergschneider knows that nature is not like that. Her work reminds us that life is complex, mutates, changes, that it cannot be dominated. 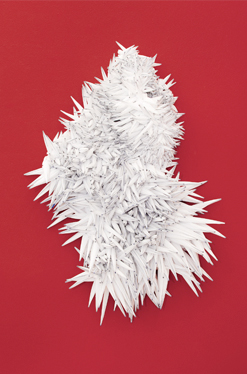 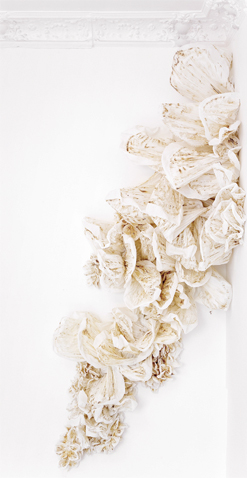 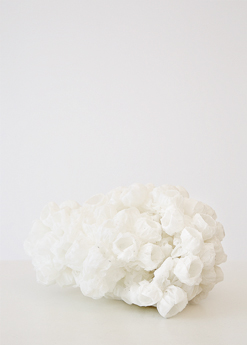